have you / do you / are you
– stolen anything? yeah, didn´t get caught though
– smoke? occasionally
– schizophrenic? um, don´t think so
– obsessive? sometimes
– compulsive? should be with some things…
– obsessive compulsive? bad combination
– panic? from time to time
– anxiety? rarely
– depressed? sometimes
– suicidal? is that a train coming?
– obsessed with hate? na…
– dream of mutilated bodies, blood, death, and gore? yeah
– dream of doing those things instead of just seeing them? also yes
– if you could be anywhere, where would you be? somewhere far away!
– can you do anything freakish with your body? have sex?
– what facial feature do you find the most attractive on others? eyes 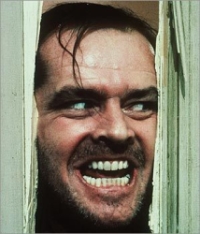